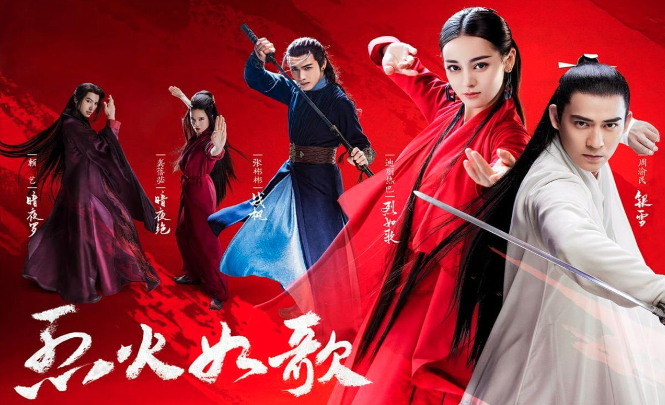 My latest obsession and definitely not because it’s Vic Zhou’s return to the small screen ^.^. Who am I kidding! I only watched it for Vic Zhou – but then became pleasantly surprised by the 52 episode long drama that I stuck around for the entire thing.

Another of the 2018 IP works (you’ll know what I mean if you read this post) that I had/hadn’t looked forward to. When I first heard of it airing, I didn’t even realise it would be a book adaptation until the nice people at AVirtualVoyage pointed it out in their posts at the end of last year.

As a fan of recent IP works (namely Love O2O), I’m all for turning the story of words to the story of images, but I also like to go into a drama knowing whether I would be in for a world of heartache at the end – or if I would be having happy dreams. I told myself I would wait till it finished airing…but with so much being said about it I couldn’t help myself and watched basically half of it before having to make myself stop.

What I hadn’t anticipated was falling so madly head over heels for Vic’s character, Yin Xue. Now those of you who have read the novel, know that there isn’t really a happy ending for any of our characters. The author had left it quite open to interpretation. The production team, on the other hand, had gone all out in advertising the main OTP as Yin Xue and Ruge which made a lot of people unhappy *coughbinbinneedsbetterrolescough*. Whereas I am a sucker for the lovelorn, injured and forever waiting male characters i.e. I’m team Xue even more after every death.

Ruge is one lucky/unlucky girl in this drama, depending on how you see her relationships with the men around her. First, you have Zhan Feng, her martial brother, the boy/man she grew up to love and had been betrothed to marry that would be the catalyst to all her troubles. Then, Yu Zi Han, the doted-on Prince who was born with the inability to walk and slowly losing all his senses due to the machinations and intrigues of the palace and finally, Yin Xue, a mysterious man who devotes his heart and life to ensuring the happiness and survival of Ruge.

I count the main OTP in this drama dying: Ruge x 2 (and she gets reincarnated from Xue’s previous lover), and Yin Xue x 3 (or at least that’s the number his character comes up with in the 2nd last episode). And let’s not mention the fact that Yin Xue is nearly always injured, and if he isn’t injured by outside forces, he’s suffering from a self-inflicted injury that attacks him once a month.

For those of you completely confused by all these names, to the characters~

Lai Yi as An Yeluo

To be fair, the original source novel has a really weird ending involving soul swaps and unrequited love. I much prefer the drama ending (one of the only few times that I will ever admit to this).

Ruge’s character borders Mary Sue quite heavily and her only saving grace is that she doesn’t hold herself up in unrequited love for the duration of the series. This is probably in part to seeing a man injure himself, and die, time and time again to save you.